In the last two blogs we discussed about Lean operations and reducing waste as well as Selecting right sensors for the job and the environment that the sensor will be placed. Anytime a sensor fails and needs a replacement, it is a major cause of downtime or waste (in Lean philosophy). One of the key benefits of IO-Link technology is drastically reducing this unplanned downtime and replacing sensors with ease, especially when it comes to measurement sensors or complex smart sensors such as flow sensors, continuous position monitoring sensors, pressure sensors, laser sensors and so on.

When we think about analog measurement sensor replacement, there are multiple steps involved. First, finding the right sensor. Second, calibrating the sensor for the application and configuring its setpoints. And third, hope that the sensor is functioning correctly.

Most often, the calibration and setpoint configuration is a manual process and if the 5S processes are implemented properly, there is a good chance that the procedures are written down and accessible somewhere. The process itself may take some time to be carried out, which would hold up the production line causing undesired downtime. Often these mission critical sensors are in areas of the machine that are difficult to access, making replacing then, let alone configuring, a challenge.

IO-Link offers an inherent feature to solve this problem and eliminates the uncertainty that the sensor is functioning correctly. The very first benefit that comes with sensors enabled with IO-Link is that measurement or readings are in engineering units straight from the sensor including bar, psi, microns, mm, liters/min, and gallons/min. This eliminated the need for measurements to be scaled and adjusted in the programming to engineering units.

Secondly, IO-Link masters offer the ability to automatically reconfigure the sensors. Many manufacturers call this out as automatic device replacement (ADR) or parameter server functionality of the master. In a nutshell, when enabled on a specific port of the multi-port IO-Link master, the master port reads current configuration from the sensor and locks them in. From that time forward, any changes made directly on the sensor are automatically overwritten by these locked parameters. The locked parameters can be accessed and changed only through authorized users. When the time comes to replace the sensor, there is only one step that needs to happen: Find the replacement sensor of the same model and plug it in. That’s it! 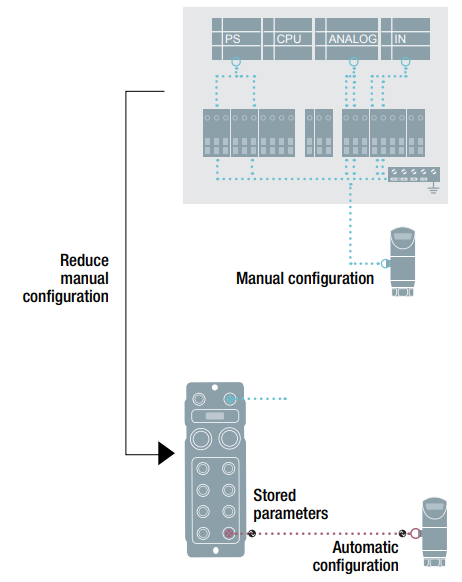 When the new sensor is plugged-in, the IO-Link master automatically detects that the replacement sensor does not have the correct parameters and automatically updates them on the sensor. Since the readings are directly in the units desired, there is no magic of scaling to fiddle with. 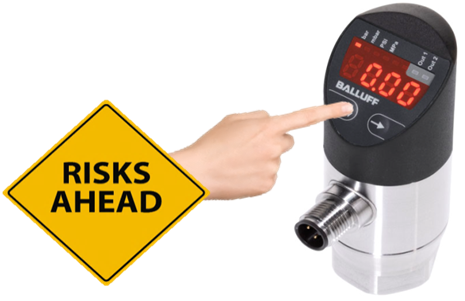 It is also important to note, that in addition to the ADR feature, there may be parameters or settings on the sensors that alert you to possible near-future failure of the sensor. This lets you avoid unplanned downtime due to sensor failure. A good example would be a pressure sensor that sends an alert (event) message indicating that the ambient temperature is too high or a photo-eye alerting the re-emitted light value is down close to threshold – implying that either the lens is cloudy, or alignment is off.

To learn more about IO-Link check out our other blogs.