Recently I was asked if light on and dark on for a photoelectric sensor was the same as normally open and normally closed.  The short answer is yes, but I think it justifies more of an explanation.  In the world of proximity sensors, capacitive sensors, and mechanical switches when the target is present the output changes state and turns on or turns off; there is no ambiguity.

There are three modes of operation with photoelectrics: diffuse, retro-reflective, and through-beam; and the sensing mode determines if the sensor is normally light-on or dark-on.  Retro-reflective and through-beam sensors function as light-on operate sensors because under normal operating conditions there is a reflector or a light emitter providing a light beam back to the sensor receiver.  If no object is blocking the light beam to receiver the output is on, normally closed.  If the target or object is in between the reflector or emitter then the light beam can no longer reach the receiver causing the output to turn off.

Since the diffuse mode of operation requires the target or object to reflect the light source back to the receiver, it functions as a dark-on operate, normally open.  If no object or target is placed in front of the sensor, no light will be reflected back to the receiver.  When the object is present, the output changes state from normally open to closed.

The chart below should help to summarize the above: 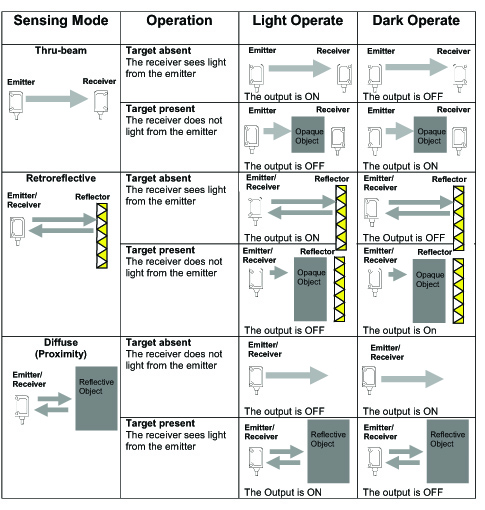 One Reply to “Photoelectric Basics – Light On or Dark On”