In one of my previous post we covered “How do I wire my 3-wire sensors“. This topic has had a lot of interest so I thought to myself, this would be a great opportunity to add to that subject and talk about DC 2-wire sensors. Typically in factory automation applications 2 or 3 wire sensors are implemented within the process, and as you know from my prior post a 3 wire sensor has the following 3 wires; a power wire, a ground wire and a switch wire.

In the wiring diagrams below you will notice the different call outs for the Polarized vs. Non-Polarized offerings. 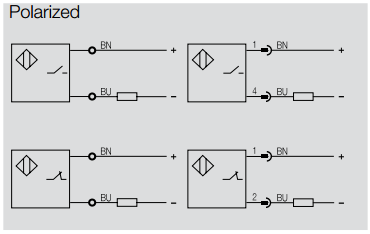 While 3-wire sensors are a more common option as they offer very low leakage current, 2 wire offerings do have their advantages per application. They can be wired in a sinking (NPN) or sourcing (PNP) configuration depending on the selected load location. Also keep in mind they only have 2 wires simplifying connection processes.

Welcome to the first in a series of getting back to the basic blogs about photoelectric sensors.

All photoelectric sensors require a light source to operate. The light source is integral to the sensor and is referred to as the emitter. Some light sources can be seen and may be of different colors or wavelengths for instance red, blue, green, white light or laser or one you cannot see, infrared. Many years ago photoelectric sensors used incandescent lights which were easily damaged by vibration and shock. The sensors that used incandescence were susceptible to ambient light which limited the sensing range and how they were installed.

Today light sources use light emitting diodes (LED’s). LED’s cannot generate the light that the incandescent bulbs could. However since the LED is solid state, it will last for years, is not easily damaged, is sealed, smaller than the incandescent light and can survive a wide temperature range. LED’s are available in three basic versions visible, laser and infrared with each having their advantages.

Visible LED’s which are typically red, aid in the alignment and set up of the sensor since it will provide a visible beam or spot on the target. Visible red LED’s can be bright and should be aimed so that the light will not shine in an operator’s eyes. The other color visible LED’s are used for specific applications such as contrast, luminescence, and color sensors as well as sensor function indication.

Laser LED’s will provide a consistent light color or wavelength, small beam diameter and longer range however these are generally more costly. Lasers are often used for small part detection and precision measuring. Although the light beam is small and concentrated, it can be easily interrupted by airborne particles. If there is dust or mist in the environment the light will be scattered making the application less successful than desired. When a laser is being used for measuring make sure the light beam is larger than any holes or crevasses in the part to ensure the measurement is as accurate as possible. Also it is important to ensure that the laser is installed so that it is not aimed into an operator or passerby’s eyes.

Lastly, the infrared LED will produce an invisible, to the human eye, light while being more efficient and generating the most light with the least amount of heat. Infrared light sources are perfect for harsh and contaminated environments where there is oil or dust. However, with the good comes the bad. Since the light source is infrared and not visible setup and alignment can be challenging.

LED’s have proved to be robust and reliable in photoelectric sensors. In the next installment we will review LED modulation.

You can learn more about photoelectric sensors on our website at www.balluff.us

The question about maximum cable length for analog sensors comes up pretty frequently.  Generally speaking, the issue is that electrical conductors, even good ones, have some resistance to the flow of current (signals).  If the resistance of the conductor (the cable) gets high enough, the sensor’s signal can be degraded to the point where accuracy suffers, or even to the point where it becomes unusable.  Unfortunately, there is no hard and fast answer to the question.  Variables such as wire gauge, whether or not the cable is shielded, where and how the cable is routed, what other types of devices are nearby, and other factors come into play, and need to be considered.  A discussion about all of these variables could fill a book, but we can make some general recommendations:

END_OF_DOCUMENT_TOKEN_TO_BE_REPLACED

I recently had a conversation with a customer that resulted in one of those forehead-slapping “duh” moments for me, and I thought it might be worth passing along. Here’s the story:

The customer had an application that required an analog linear feedback sensor that provided an output of 1 volt to 5 volts over the linear stroke range. Now, a 1-5V output is not very common, and the particular sensor he was interested in was only available with either a 0-10V or a 4-20 mA output. What to do? Perhaps the answer should have been obvious to me, but it was the customer who provided the solution this time: “couldn’t I use a 4-20 mA output and 250 ohm resistor to get my 1-5V output?” Why, yes….yes you could (smack…..duh!). And I know it will work, because we have the law on our side. Ohm’s Law, that is: E = IR, or voltage equals current x resistance.

So there you have it. Take a very common 4-20 mA output and drop it across a 250 ohm resistor and, lo and behold, you have your less common 1-5V signal. And, if you do this conversion right at the input to the controller, you get the added benefit of increased noise immunity of the 4-20 mA signal.

And, yes, I’m sure I knew of this little trick at one time. Maybe the part of my brain where this information was stored got overwritten by the names of the contestants on The Amazing Race or by the rollout plans for my million dollar consumer product idea: Dehydrated Water (just add water). But let’s keep that just between us, ok?

In typical sensors all you get is ON or OFF… we just hope and assume that the prox is working, until something doesn’t work properly.  The part is seated but the sensor doesn’t fire or the operator can’t get their machine to cycle.  This can sometimes be tricky to troubleshoot and usually causes unplanned interruptions in production while the maintenance teams attempt to replace the sensor.  On some recent customer visits on the east coast, I have had a number of  interesting conversations about the customer’s need to collect more information from their sensors; specifically questions like:

END_OF_DOCUMENT_TOKEN_TO_BE_REPLACED

I recently watched a short webinar recorded by the PI North America organization and it really helped me understand the basics of how ethernet communication comes together.  There are so many protocols and standards and they all communicate on the same media.  Carl and Hunter do a good job presenting ethernet in a technical but easy to understand way.

The webinar is here.  Their topics include:

END_OF_DOCUMENT_TOKEN_TO_BE_REPLACED

I am experiencing the future of tradeshows; a networking & educational conference without the travel, the expense, and the suit!  I can sit at my desk and make contact with future vendors and customers.  The online database GlobalSpec hosts multiple times per year industry specific virtual tradeshow events.  There are presentations and exhibitors.  A place to sit and drink virtual coffee with your peers and of course the token giveaway raffles.

Today I am working the Balluff booth in the Sensors and Switches Virtual show.  It is a collection of companies and attendees from many different industries.  I really enjoy these events because we can contact quickly with potential customers and potential vendors right from the comfort of our conference room and at a much reduced cost. Here you can see our hard working staff chatting with customers.

Check out the Balluff booth at the  Sensors & Switches Virtual Tradeshow, it will be available to visit for 90 days from today.

In a previous post we saw the myriad of different applications capacitive technology is involved in. We will discuss today the underlying physical principles of these sensors.

END_OF_DOCUMENT_TOKEN_TO_BE_REPLACED

Over the last year I have been discussing IP rated products with people in various positions  in the manufacturing world and I have encountered some false assumptions about IP67 protection.  I want to quickly go over what an IP67 test actually is and then go into the assumptions I’ve seen.

END_OF_DOCUMENT_TOKEN_TO_BE_REPLACED

In this new series we will write about different aspects of capacitive sensors in today’s factory automation world. Capacitive sensors found their place in certain industries and applications as effective problem solvers for specific tasks such as plastic pellet detection devices in injection molding machines and liquid level monitors in the semiconductor industry.