Today, engineers are adding more and more sensors to in-die sensing packages in stamping applications. They do so to gain more information and diagnostics from their dies as well as reduce downtime. However, the increased number of sensors also increases the number of electric connections required in the automation system. Previously, the most common technique to accommodate large numbers of sensor in these stamping applications was with large, multi-pin connectors. (Figure 1)

The multi-pin connector approach works in these applications but can create issues, causing unplanned downtime. These problems include:

Inductive couplers (non-contact) are another solution for in-die sensors connecting to an automation system. With inductive couplers, power and data are transferred across an air gap contact free. The system is made up of a base (transmitter) and remote (receiver) units. The base unit is typically mounted to the press itself and the remote unit to the die. As the die is set in place, the remote receives power from the base when aligned and exchanges data over a small air gap.

The remote and base units of an inductive coupler pair are fully encapsulated and typically rated IP67 (use like rated cabling). Because of this high ingress protection rating, the couplers are not affected by coolant, die lubricants, and/or debris in a typical stamping application. Being inherently non-contact, there is no mechanical wear and less unplanned downtime.

When selecting an inductive coupler, there are many considerations, including physical form factors (barrel or block styles) and functionality types (power only, input only, analog, configurable I/O, IO-Link, etc…). IO-Link inductive couplers offer the most flexibility as they allow 32 bytes of bi-direction data and power. With the large data size, there is a lot of room for future expansion of additional sensors.

Adding inductive couplers can be an easy way to save on unexpected downtime due to a bad connector.

When it comes to connecting I/O in factory automation settings, there are many options one can choose to build an efficient and cost-effective system. This is one area where you can reduce costs while also boosting productivity.

It is common in the industry for single ended cables to be run from sensors to a controller input card in a centralized control cabinet. And while this method works, it can be costly for a number of reasons, including:

Using double ended cables along with network I/O blocks allows for a cost-effective solution to distribute I/O and increase up time. There are numerous benefits that come along with this sort of architecture. Some of these benefits are:

Using IO-Link delivers all of the strengths of networked I/O as well as additional benefits:

Many people are using inductive coupling technology to provide a non-contact connection for their devices. This method allows you to pass both power and signal across an air gap making it ideal for replacing slip rings or multi-pin connectors in many applications. This provides some great options for industry to gain benefits in these areas such as:

In press shops or stamping plants, downtime can easily cost thousands of dollars in productivity. This is especially true in the progressive stamping process where the cost of downtime is a lot higher as the entire automated stamping line is brought to a halt. 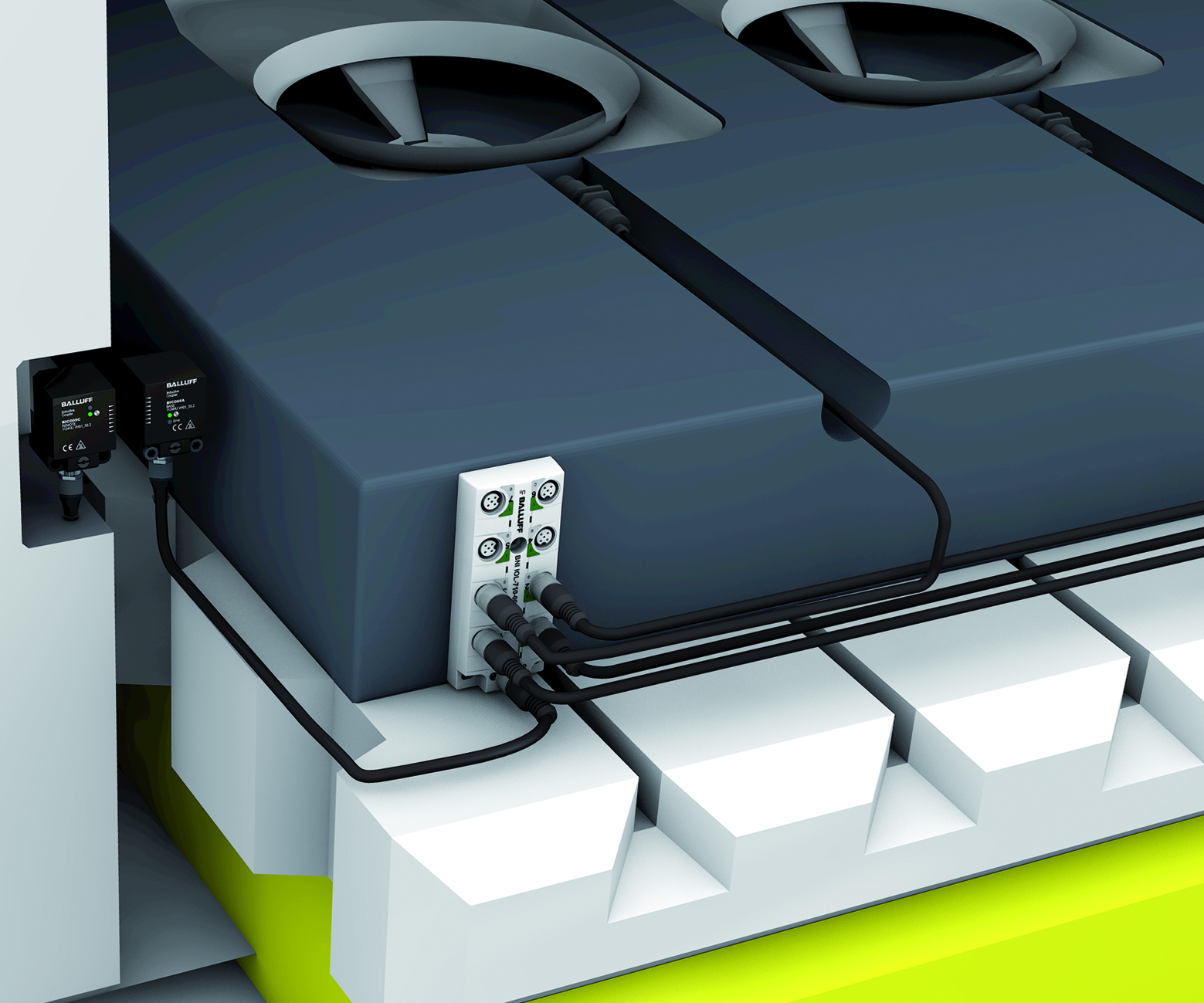 Many strides have been made in modern stamping plants over the years to improve productivity and reduce the downtime. This has been led by implementing lean philosophies and adding error proofing systems to the processes. In-die-sensing is a great example, where a few inductive or photo-eye sensors are added to the die or mold to ensure parts are seated well and that the right die is in the right place and in the right press. In-die sensing almost eliminated common mistakes that caused die or mold damages or press damages by stamping on multiple parts or wrong parts.

In almost all of these cases, when the die or mold is replaced, the operator must connect the on-board sensors, typically with a multi-pin Harting connector or something similar to have the quick-connect ability. Unfortunately, often when the die or mold is pulled out of the press, operators forget to disconnect the connector. The shear force exerted by the movement of removing the die rips off the connector housing. This leads to an unplanned downtime and could take roughly 3-5 hours to get back to running the system.

Another challenge with the multi-conductor connectors is that over time, due to repeated changeouts, the pins in the connectors may break causing intermittent false trips or wrong die identification. This can lead to serious damages to the system.

Both challenges can be solved with the use of a non-contact coupling solution. The non-contact coupling, also known as an inductive coupling solution, is where one side of the connectors called “Base” and the other side called “Remote” exchange power and signals across an air-gap. The technology has been around for a long time and has been applied in the industrial automation space for more than a decade, primarily in tool changing applications or indexing tables as a replacement for slip-rings. For more information on inductive coupling here are a few blogs (1) Inductive Coupling – Simple Concept for Complex Automation Part 1,  (2) Inductive Coupling – Simple Concept for Complex Automation Part 2

For press automation, the “Base” side can be affixed to the press and the “Remote” side can be mounted on a die or mold, in such a way that when the die is placed properly, the two sides of the coupler can be in the close proximity to each other (within 2-5mm). This solution can power the sensors in the die and can help transfer up to 12 signals. Or, with IO-Link based inductive coupling, more flexibility and smarts can be added to the die. We will discuss IO-Link based inductive coupling for press automation in an upcoming blog.

Some advantages of inductive coupling over the connectorized solution:

In short, press automation can gain a productivity boost, by simply changing out the connectors to non-contact ones.

For the purpose of this article, when we talk about contact based technology, the example we’re using is resistive linear potentiometers.  And for non-contact technology, we’re talking about magnetostrictive sensors.

In industrial linear position sensing applications, both ultimately do the same job; provide variable analog signals that represent the linear position of a machine or a process.  The difference is how the signal is derived.

Resistive linear potentiometers employ a resistive element upon which a spring-loaded contact rides:

The output of the sensor represents the position of the slider along the resistive element and typically ranges from 0-10Vdc or -10 to +10Vdc.  Out of the box, performance and accuracy is pretty good.  But after repeated cycles, wear can start to place that affects the connection between the resistive element and the contact.  The end result is signal anomalies and worsening performance over time, as can be seen in the image below.

Other external factors, such as dirt and/or moisture only serve to accelerate this declining performance. 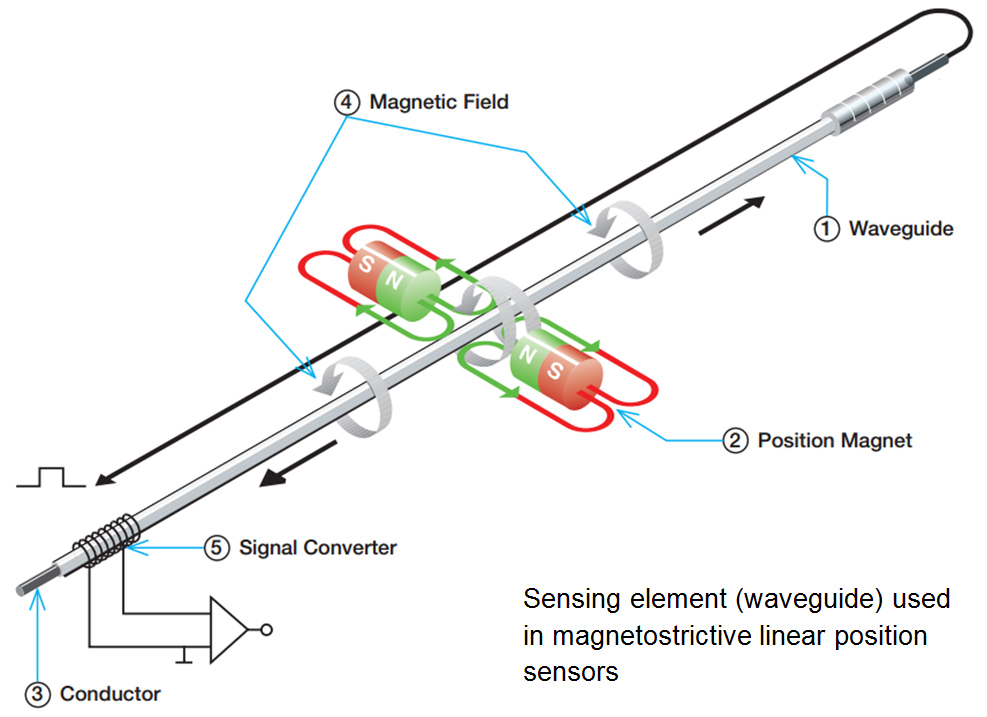 Non-contact technology, such as is incorporated into magnetostrictive linear position sensors, isn’t vulnerable to mechanical wear and subsequent performance degradation.

Unlike, resistive sensors, magnetostrictive sensors operate on the principle of magnetism.  Interacting magnetic fields define the output value, which changes as a moving magnet travels along a sensing element, called a waveguide.  There is no mechanical contact, so there is no mechanical wear.  The result is greatly enhanced life expectancy and consistently excellent performance

Generally, resistive linear position sensor cost a bit less than magnetostrictive sensors.  However, that doesn’t tell the whole story.  True cost of ownership has to be considered.  For a more complete discussion about cost of ownership, take a few minutes to review the Sensortech article The True Cost of Low Cost. 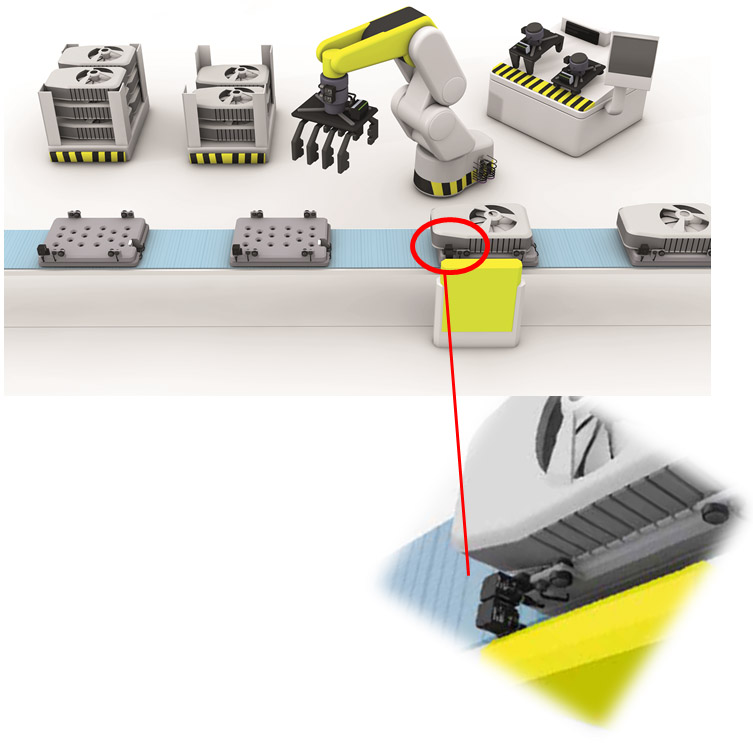 In today’s competitive manufacturing environment, the name of the game is increased throughput.  Unprecedented global competition means that industrial manufacturing machinery must be able to run better (faster, longer, hotter, etc.) and more reliably than ever before.