Sensors and peripheral devices are a critical part of any robot system, including collaborative applications. A wide variety of sensors and devices are used on and around robots along with actuation and signaling devices. Integrating these and connecting them to the robot control system and network can present challenges due to multiple/long cables, slip rings, many terminations, high costs to connect, inflexible configurations and difficult troubleshooting. But device level protocols, such as IO-Link, provide simpler, cost-effective and “open” ways to connect these sensors to the control system.

Just as the human body requires eyes, ears, skin, nose and tongue to sense the environment around it so that action can be taken, a collaborative robot needs sensors to complete its programmed tasks. We’ve discussed the four modes of collaborative operation in previous blogs, detailing how each mode has special safety/sensing needs, but they have common needs to detect work material, fixtures, gripper position, force, quality and other aspects of the manufacturing process. This is where sensors come in.

Typical collaborative robot sensors include inductive, photoelectric, capacitive, vision, magnetic, safety and other types of sensors. These sensors help the robot detect the position, orientation, type of objects, and it’s own position, and move accurately and safely within its surroundings. Other devices around a robot include valves, RFID readers/writers, indicator lights, actuators, power supplies and more.

The table, below, considers the four collaborative modes and the use of different types of sensors in these modes: 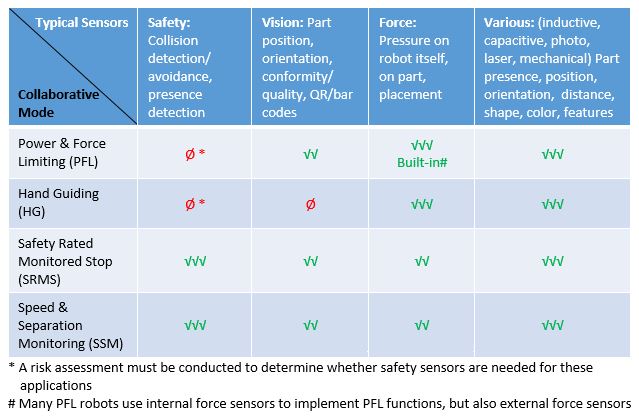 But how can users easily and cost-effectively connect this many sensors and devices to the robot control system? One solution is IO-Link. In the past, robot users would run cables from each sensor to the control system, resulting in long cable runs, wiring difficulties (cutting, stripping, terminating, labeling) and challenges with troubleshooting. IO-Link solves these issues through simple point-to-point wiring using off-the-shelf cables.

Collaborative (and traditional) robot users face many challenges when connecting sensors and peripheral devices to their control systems. IO-Link addresses many of these issues and can offer significant benefits:

Collaborative robots, or cobots, is currently one of the most exciting topics in automation. But what do people mean when they say “collaborative robot”? Generally, they are talking about robots which can safely work near and together with humans. The goal of a collaborative robot system is to optimize the use of humans and robots, building on the capabilities of each.

There are four modes of robot collaborative operation defined by the global standard ISO/TS 15066. We discussed these modes in a previous blog, Robot Collaborative Operation.

This post will go more deeply into the most commonly used mode: power & force limiting. Robots in this category include ones made by Universal Robots, as well as FANUC’s green robots and ABB’s Yumi.

What is power & force limiting?

Power & force limiting robots are designed with limited power and force, along with physical features to avoid or reduce injury or damage in case of contact. These robots are generally smaller, slower and less powerful than traditional robots but also more flexible and able to work near or with humans — assuming a risk assessment determines it is safe to do so.

The standards define the creation of a shared or collaborative work space for the robot and human, and define how they may interact in this space. In a power & force limiting application, the robot and operator can be in the shared/collaborative work space at the same time and there may be contact or collision between the operator and the collaborative robot system (which includes the robot, gripper/tool and work piece). Under the proper conditions the features built into the power & force limiting robot allow this close interaction and contact to occur without danger to the operator.

What technologies allow these robots to work closely with humans?

The limiting of the robot’s force can be implemented in several ways. Internal torque/feedback sensors in the joints, external sensors or “skins” and/or elastic joints are some of the methods robot suppliers use to assure low force or low impact. They also design possible contact areas to avoid injury or damage by using rounded edges, padding, large surface areas, etc. to soften contact. Grippers, tools and work pieces also need to be considered and designed to avoid injury or damage to people and equipment.

Similar to traditional robots, power & force limiting robots are best applied in applications which are dull, dirty and/or dangerous (the 3 Ds of robotics). They are especially well suited to applications where the danger is ergonomic — repetitive tasks which cause strain on an operator. In many cases, power & force limiting robots are being applied to cooperate closely with people: the robots take on the repetitive tasks, while the humans take on the tasks which require more cognitive skills.

What are some of the benefits and drawbacks to power & force limiting robots?

Buying a power & force limiting robot does not necessarily mean that fences or other safeguards can be removed; a risk assessment must be completed in order to ensure the application is appropriately safeguarded. The benefits, however, can be significant, especially for smaller firms with limited resources. These firms will find that power & force limiting robots are very good at cost-effectively solving many of their dull, dirty and dangerous applications.