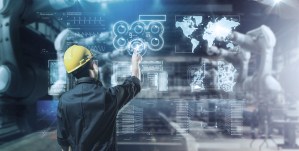 In our previous blogs, we discussed the basics of the P-F (Potential – Functional Failure) curve and the cost-benefit tradeoffs of various maintenance approaches. We’ll now describe the measures that can be taken to discover failure indicators along the P-F curve. 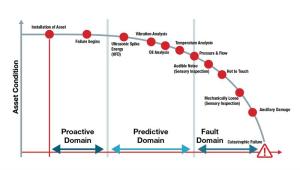 The basic concept of the P-F curve is that as a machine or asset deteriorates, various symptoms/indicators emerge. The early-stage indicators may be harder to detect and may require more sophisticated and expensive systems to analyze, but they give you more time to take action to prevent a catastrophic failure. They allow users to choose times to service a machine when it’s less disruptive to the manufacturing process and when only minor maintenance actions, such as changing lubricant, replacing a filter or balancing a fan, are needed rather than major parts repair/replacement. The later-stage indicators may be more obvious and simpler to notice, but they may require extensive and expensive maintenance since greater deterioration has taken place.

Some monitoring methods can be done on a continual basis by using a permanently mounted sensor that takes samples at intervals of once an hour or more often. Others can only be done on a one-time or periodic basis, as when a sensor is brought in for special analysis, perhaps once a month or less often.

This version of the P-F curve lists several common indicators and detection methods, in rough order of when they might start to reveal deterioration in an asset:

This list does not cover all possible indicators. Machine users and builders may have others depending on their unique application – other potential methods to detect asset deterioration include monitoring of current, corrosion, or leaks.

The “best” indicator and approach will depend on each user’s and each asset’s unique risk/cost/benefit profile. Machine builders and users should work closely with an experienced condition monitoring solution provider who provides multiple solutions to help consider and assess the tradeoffs associated with various approaches.