Example of a Flexible EOA Tool with 8 sensors connected with an Inductive Coupling System.

Over the years I’ve interviewed many customers regarding End-Of-Arm (EOA) tooling. Most of the improvements revolve around making the EOA tooling smarter. Smarter tools mean more reliability, faster change out and more in-tool error proofing.

#4: Lose the weight…look at the connectors and cables. M8 and M5 connectorized sensors and cables are readily available. Use field installable connectors to help keep cable runs as short as possible. We see too many long cables simply bundled up.

#3: Go Small…use miniature, precision sensors that do not require separate amplifiers. These miniature sensors not only cut down on size but also have increased precision. With these sensors, you’ll know if a part is not completely seated in the gripper.

#2: Monitor those pneumatic cylinders…monitoring air pressure in one way, but as speeds increase and size is reduced, you really need to know cylinder end of travel position. The best technology for EOA tooling is magnetoresistive such as Balluff’s BMF line. Avoid hall-effects and definitely avoid reed switches. Also, consider dual sensor styles such as Balluff’s V-Twin line.

#1: Go with Couplers…with interchangeable tooling, sensors should be connected with a solid-state, inductive coupling system such as Balluff’s Inductive Coupler (BIC). Avoid the use of pin-based connector systems for low power sensors. They create reliability problems over time.

While originally a mixed reviewed 1994 console video game, the recently published report by The Boston Consulting Group titled “The Rise of Robotics”  really made me realize how important it is that we embrace robotics in our manufacturing processes.  And I strongly agree with this statement: “Because robots can sharply improve productivity and offset regional differences in labor costs and availability, they’ll likely have a major impact on the competitiveness of companies and countries alike.”  They studied the growth of the usage of robots in personal, commercial, military and industrial use and the numbers were quite powerful.  Of interest to me is the rise in industrial robotics; doubling in 5 years from $5.8b to $11.0b in 2015.  And the growth is expected to more than double again by 2025 to $24.4b in the industrial space.

What this means for manufacturers, machine builders and component suppliers is we need to make sure our people are trained to support this growth and that we we have strong peripheral technologies to support robots as they grow and expand.  Even today there are some great technologies available in sensors and controls that make robotic integration easier for manufacturing companies.

So here are the three ways to make sure you are your robot’s ally.

So as you integrate robots more and more into the manufacturing we are doing, please start thinking how to align yourself as a robot’s ally.  Because I know I want to be on this guy’s team…

Environments with debris and caustic agents, wear down equipment exponentially. When a cell goes down, every minute counts to get production up and running.  An accessory like a cordset is important for operations, and can frustrate technicians when it fails. Cordsets do not last forever in this environment and to help save money, time and work, we came up with the concept of a “sacrificial cable.” The basic idea is to install a double-ended cable under 2 meters to help in situations where cables are placed in surroundings which will destroy the cable.  A sacrificial cable’s main function is to save time reducing cable replacement downtime and money.

A sacrificial cable does not have to be a specialty cable with a custom jacket; it could just be a 1 meter PVC cable that will get changed out often. The idea is that by placing a sacrificial cable in a problematic area and connecting it to a longer length cable this will allow maintenance to have a shorter down time when changing out failures less.  This is accomplished with travel around the cell following a cable run and less maintenance expense in labor.

END_OF_DOCUMENT_TOKEN_TO_BE_REPLACED

In a previous post, I talked about receptacles for automation equipment.  But there are many different types of mounting when it comes to receptacles.  When picking a mounting type, it is based on preference.  Each type of mounting has its good points.  Depending on what else is inside the cabinet, might sway which mounting is preferred.

END_OF_DOCUMENT_TOKEN_TO_BE_REPLACED

In today’s industrial market, Ethernet cable is in high demand. With words like Ethernet, Ethernet/IP, solid, and stranded, making a decision from the different types of cable can be difficult.

I want to make it easy for you to pick the right cable to go with the network of your choosing.  As a network, Ethernet is easy to install and it is easy to connect to other networks – you can probably even have Ethernet network devices connect to your current network.

So, let’s start with the basics…First, what is the difference between Ethernet and Ethernet/IP?  They both have teal jackets (hence the title – The “Spring Line”) due to the industrial Ethernet standards in North America. So, the difference between the two is in the application.  Ethernet is a good networking cable that transmits data like an internet cable.  Ethernet/IP transmits data and also has an industrial protocol application.  The Industrial Protocol (IP) allows you to transmit more data if you have a lot devices connected to each other or a lot of machines moving at once.  Ethernet/IP resists against UV rays, vibrations, heat, dust, oil, chemical, and other environmental conditions.

Next, there are two kinds of Ethernet IP cables: Solid and Stranded. Solid is great for new applications that require high-speed Ethernet.  The solid cables can transmit and receive across long distances and have a higher data rate compared to stranded.  The downside is that solid cables can break, and do not bend or flex well. Stranded is a better cable if you have to bend, twist, or flex the cable. It’s also better if you have to run short distances.  Stranded is made up of smaller gauge wires stranded together which allows the cable to be flexible and helps protect the cable. They move with the machine and will not break as easily as solid cables. 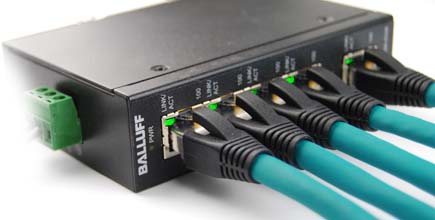 To recap, remember the four short bullet points below when choosing your next cable:

Balluff has the opportunity to share some of the company’s proven Error-Proofing Techniques in a Seminar at Fabtech on November 14, 2011 in McCormick Place in Chicago, Illinois.  The session is segmented into two areas:

END_OF_DOCUMENT_TOKEN_TO_BE_REPLACED

It’s another day at the plant, and the “Underside Clamp Retracted” sensor on Station 29, Op 30 is acting up again.  Seems to be intermittently functioning…the operator says that the line is stopping due to “Error: Underside Clamp Not Retracted”.

You think to yourself, “Didn’t we just replace that prox last week?”  A quick check of the maintenance log confirms it: that prox was indeed replaced last week.  In fact, that particular prox has been replaced seven times in the last six months.  Hmm….the frequency of replacement looks like it’s going up…four of the seven replacements were performed in the last two months.

What’s going on here?  Is it really possible that seven defective proxes just all happened to end up at Station 29, Op 30, Underside Clamp Retract?  Not likely!

END_OF_DOCUMENT_TOKEN_TO_BE_REPLACED

From conversations with many of our customers, I have found that there are two key problems encountered when working with tool change-outs:

END_OF_DOCUMENT_TOKEN_TO_BE_REPLACED

In the design of automation equipment everyone is looking for an edge.  How can I make parts faster or easier or safer?  I’m sure you don’t encounter the need for 360 degree rotation everyday; but when you do, it can become a pain to maintain sensor and actuator information or even a network connection.

There are two different ways to maintain your connection in a rotation application: