This is the most commonly used teach method for most sensing applications. As an object is placed statically in front of the sensor at its desired detection point, the amplifier is triggered to teach-in this value as its switch point (SP1). Once the value is taught, the output will then switch when the switch point is reached.

As the name sug
gests this teach method has two separate teach-in points, a switch-on point (SP1) and a switch-off point (SP2). These points can be taught wide apart or close together, depending on the application need. One application example is for fill-level control by teaching in min. and max. fill-level points.

This mode only responds to moving objects and ignores static conditions. This mode is commonly used to ignore a close background, and only detect objects moving in front of the sensor.

Additionally, an analog output (either voltage or current) is available. To utilize the whole analog range, two separate teach points are needed. SAHi, analog signal high, and SALo, analog signal low, are taught accordingly to obtain the full range. An application example would be continuous fill-level detection across the sensing area.

For more information on capacitive sensors and their remote amplifiers, click h
ere.

As discussed in a previous blog post, miniature sensors are an ongoing trend in the market as manufacturing and equipment requirements continue to demand smaller sensor size due to either space limitations and/or weight considerations. However, size and weight aren’t the only factors. The need for more precise sensing — higher accuracy, repeatability, and smaller part detection — is another demanding requirement and, often times, the actual main focus point.

Capacitive sensors provide non-contact detection of all types of objects, ranging from insulators to conductors and even liquids. A capacitive sensor uses the principle of capacitance to detect objects. The equation for capacitance takes into account the surface area (A) of either electrode, the distance (d) between the electrodes, and the dielectric constant (εr) of the material between the electrodes. In simple terms: a capacitive sensor detects the change in capacitance when an object enters its electrical field. Internal circuitry determines if the gain in capacitance is above the set threshold. Once the threshold is met the sensor’s output is switched.

When looking at small part detection, the size of the capacitive sensor’s active sensing surface plays a significant part. Now there isn’t a defined formula for calculating smallest detectable object for a capacitive sensor because of the numerous variables that need to be considered (as seen in the equation above). However, the general rule for optimal sensing is that the target size should be at least equal to the size of the sensor’s active surface. The reason behind this is if the target size is smaller than the sensor’s active surface, the electric field would travel around the target and cause unreliable readings. 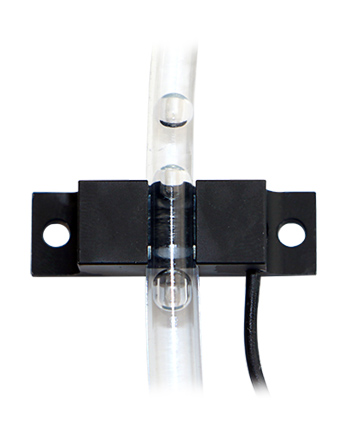 Bubble or air-in-line detection is a common lab automation application. In these types of applications it’s important to know whether or not liquid is flowing through a line to ensure safe and proper function in liquid-handling processes.  As these processes utilize smaller and smaller volumes of liquid — which provides cost and time saving benefits — it becomes more and more difficult to detect the potential air pockets forming inside the line. The most common approach in detecting these minute air pockets is a through-beam, photoelectric bubble sensor.

Photoelectric bubble sensors provide non-invasive detection of fluids and air pockets residing inside a tube. They have fixed opening dimensions for standard tube sizes allowing the selected tube to sit in perfect position between the sensor’s optical components. When the sensor’s light beam is blocked by fluid (or an air pocket) inside the tube, the received signal varies and external electronics determine if the signal variation is above or below the set threshold. Once the threshold is met the sensor’s output is switched.

Detecting bubbles sounds quite straightforward and simple, but in reality the application can be somewhat complicated. Several factors should be considered for reliable detection. Listed below are a few factors to consider: 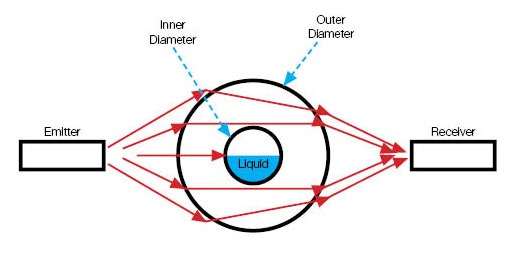 Because a tube acts as a lens for light to travel it’s important to factor in the tube diameters. If there is a large difference between the outer and inner diameters of a particular tube, the outcome is a relatively large tube wall. A large tube wall will allow light rays to travel from the emitter through the wall straight to the detector without passing through the inner diameter of the tube, where the liquid or bubble is present. This causes unreliable detection. By accounting for both the inner and outer tube diameters a proper determination can be made in selecting what type of sensor to use to ensure that light only passes through the inner diameter of the tube and not through the wall. 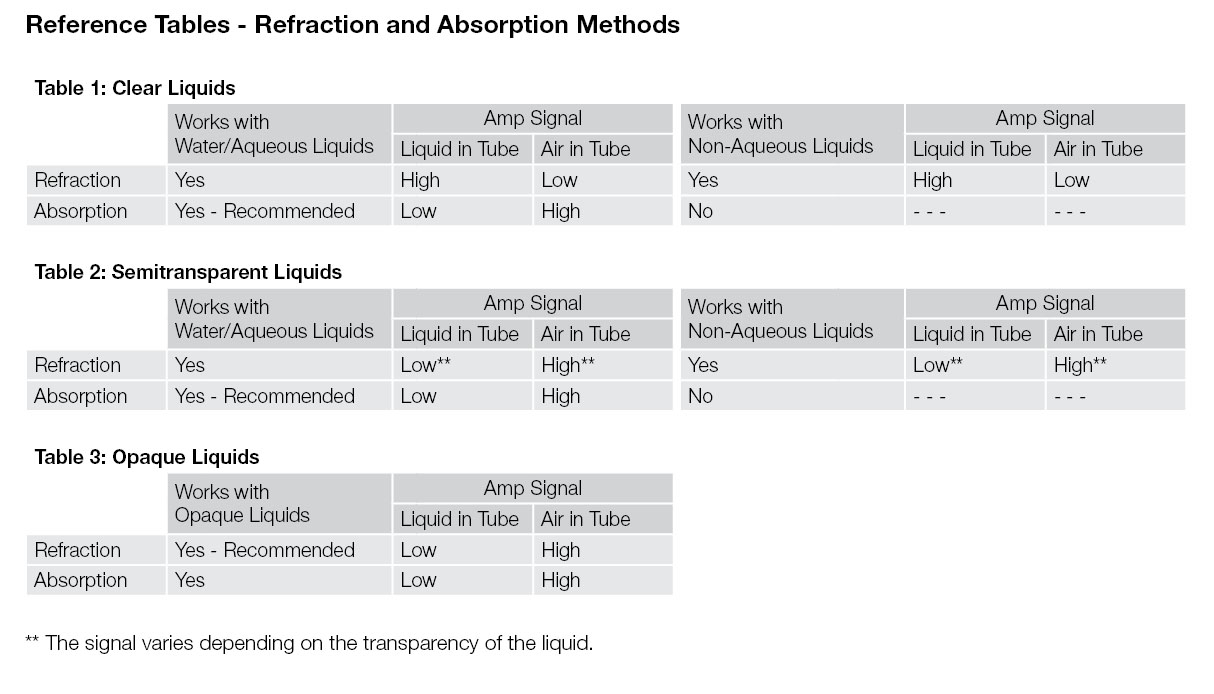 Since the type of applications that require precise bubble detection range in specifications from the use of hundreds of different liquids to specialized tube dimensions, this post only touches the surface of the photoelectric sensors for bubble detection.  For more information on tube sensors, please visit the Balluff website.

As I discussed in my last blog post, there is a need for miniature, precision sensors. However, finding the right solution for a particular application can be a difficult process. Since every sensor technology has its own strengths and weaknesses, it is vital to have a variety of different sensor options to choose from.

The good news is that there are several different technologies to consider in the miniature, precision sensor world. Here we will briefly look at three technologies: photoelectric, capacitive, and inductive. Together these three technologies have the ability to cover a wide range of applications.

Miniature photoelectric sensors come with either the electronics fully integrated into the sensor or as a sensor with separate electronics in a remote amplifier. 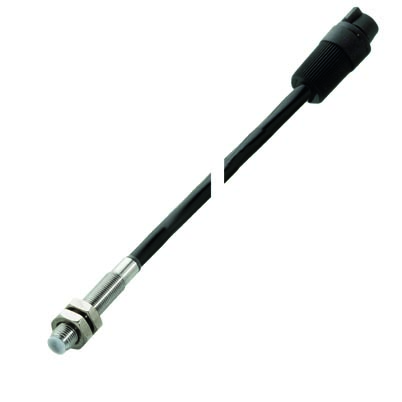 Capacitive sensors use the electrical property of capacitance and work by measuring changes in this electrical property as an object enters its sensing field. Capacitive sensors detect the presence or absence of virtually any object with any material, from metals to powders to liquids. It also has the ability to sense through a plastic or glass container wall to detect proper fill level of the material inside the container.

Miniature capacitive sensors come with either the electronics fully integrated into the sensor or as a sensor with separate electronics in a remote amplifier. 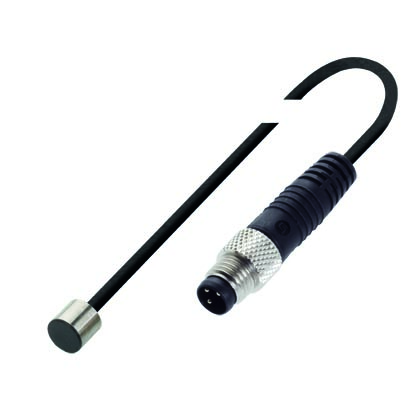 Inductive sensors use a coil and oscillator to create a magnetic field to detect the presence or absence of any metal object. The presence of a metal object in the sensing field dampens the oscillation amplitude. This type of sensor is, of course, ideal for detecting metal objects.

Miniature inductive sensors come with the electronics fully integrated into the sensor.

One sensor technology isn’t enough since there isn’t a single technology that will work across all applications. It’s good to have options when looking for an application solution.

To learn more about these technologies, visit www.balluff.us

Celebrating the Holiday season is one of my favorite times of the year. Some of the common activities I enjoy include spending time with family and friends, eating a tremendous amount of food (and wondering afterward why I do this to myself year after year), and giving and receiving a few presents. Let’s focus on the presents aspect for a second. The bigger the present the better, right? Well, we know that’s not always the case. That smaller present could very well be the perfect gift.

Now let’s shift gears and look at manufacturing. There is a trend in manufacturing, in general, toward miniaturization. Earlier this year I was shown a website, MICRO Manufacturing, that looks across different industries to see how the miniaturization trend is being engaged. One of the more obvious cases is in consumer electronics. It all started taking off with the desktop computer. Following the desktop computer was the laptop. And in the past few years we’ve seen the rise of smartphones and tablets. Now we’re beginning to see smart wearable devices (watches, fitness trackers, glasses, etc.). Who knows what will happen next? I bet we could take a good guess: it’ll be something even smaller.

And, just like that small present during the Holidays, a miniature, precision sensor could be the perfect solution.

The answer: a laser micrometer.

But how is this done exactly? Let’s find out!

A laser micrometer consists of two opposed sides, a transmitter side and a receiver side. These two sides sit opposite of each other to detect any object that enters in-between them.

On the transmitter side, a laser light source is positioned so that its emitted light enters a lens. The lens then collimates the light from the laser by refraction into a collimated beam of light (see Figure 1). By definition, a collimated light beam is a light beam where each light path in the beam is travelling parallel to one another. This collimated light beam has minimal divergence, even over large distances.

On the other side, the receiver side, a CCD (charge-coupled device) is positioned to collect the light emitted from the transmitter side. CCDs are made up tiny light-sensitive cells. These cells convert the amount of light intensity received into a corresponding electric charge, which can then be measured (see Figure 2).

The combination of these two components, a collimated light beam and a CCD, make up the foundation of a standard laser micrometer. The collimated light beam, which consists of a homogeneous light band, is directed at the CCD, which consists of hundreds of tiny light-sensitive cells. With this configuration, even a slight change in an object (e.g., its diameter, height, position, etc.) causes a change in the object’s corresponding shadow that is projected onto the CCD. This slight change can then be measured.

A few examples of the measurement capabilities for a laser micrometer are listed below, along with a video.

The following video showcases the capabilities of the Balluff Light Array sensor: http://www.youtube.com/watch?v=btumxuIgj_4.

Optical window sensors are utilized where reliable part counting is needed. This type of sensor technology is based on an array of LEDs on one side, opposite an array of phototransistors on the other side. This array covers the whole area of the window’s opening with an evenly as possible distribution of light. The more evenly distributed the light is throughout the window, the higher the resolution.