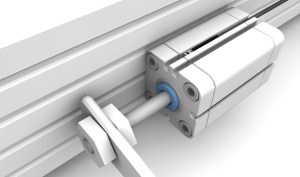 Today’s pneumatic cylinders are compact, reliable, and cost-effective prime movers for automated equipment. They’re used in many applications, such as machinery, material handling, assembly, robotics, and medical. One challenge facing OEMs, integrators and end users is how to detect reliably whether the cylinder is fully extended, retracted, or positioned somewhere in between before allowing machine movement. 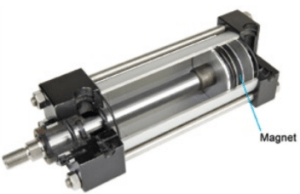 A widely used method for cylinder position detection is to attach magnetically actuated switches or sensors to the sides of the cylinder using brackets, or by inserting them into a slot extruded into the body of the cylinder. Magnetic field sensors detect an internal magnet that is mounted on the moving piston through the aluminum cylinder wall.

The selection of which type of magnetic sensors to use depends on your application needs and specific data requirements.

The reed switch is the most simplistic and most often used end-of-stroke sensor available on the market. It consists of two flattened ferromagnetic nickel and iron reed elements enclosed in a hermetically sealed glass tube. The tube aids in minimizing contact arcing and prevents moisture from getting to the switch elements. As an axially aligned magnet approaches the switch element, the reed elements are magnetized and attracted together completing the circuit. 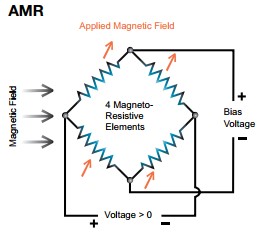 Most cylinder manufacturers and OEMs use electronic sensors with either magnetoresistive technology (AMR) or giant magnetoresistive (GMR). Both versions are based on a change in resistance. One advantage of these sensors is that they will work with the axially magnetized magnet and, in some cases, the radially magnetized magnet. GMR sensors can be physically smaller than the AMR sensors. They are more sensitive, more precise and have a better hysteresis. Versions exist that provide reverse polarity protection, overload protection, and short circuit protection.

Position detection sensors for both C-slots and T-slots

Pneumatic cylinders typically have either a C-slot or T-slot feature in the extrusion of the cylinder body. Many sensor housings have these same housing profiles and the sensor can either be dropped into the slot from above and tightened with a screw or slid in from the end of the cylinder provided there is no end plate. For round cylinders or tie rod cylinders, additional brackets are available that can use either a C-slot or T-slot sensor. This allows for commonality of sensors for end users and OEMs to meet the needs of many applications and reduce the number of sensor part numbers and inventory. 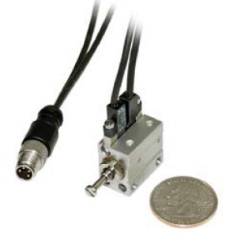 Today, there are more options than ever for piston position detection in pneumatic cylinders, including different housing styles to meet the cylinder extrusions. Also available are two sensors – one for extended and one for retracted – that share a single, four-pin connection. These magnetic sensors are also available now with weld field immunity for harsh welding applications.

Technology has advanced as well. Now cylinder sensors can be taught to trigger at certain points along the travel of the piston. The user simply moves the piston to a desired location and presses a button to set the switching location. This teachable sensor can also be connected to IO-Link, allowing up to eight switching points for flexibility in several applications.

Over the years, many users have abandoned reed switches, due to their failure rate, in favor of mechanical or inductive sensors to detect pneumatic cylinder position. AMR and GMR sensors are smaller, faster, easy to integrate, and are much more reliable. With the vast improvements in sensor technology, AMR and GMR sensors should now be considered the primary solution for detecting cylinder position.

One Reply to “Evolution of Pneumatic Cylinder Sensors”