Famed physicist Albert Einstein once said, “If you can’t explain it simply, you don’t understand it well enough.” When the topic of IO-Link comes up, whether a salesperson or technical expert is doing the explaining, I always find it’s too much for the layman without a technical background to understand. To simplify this complex idea, I’ve created an analogy to something we use in our everyday lives: highways.

Prior to the Federal Highway Act 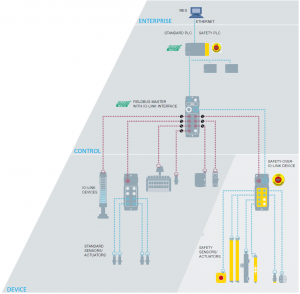 of 1956, each individual state, determined the rules of its state highway routes. This included everything from the width of the roads to the speed limits and the height of bridge underpasses — every aspect of the highways that were around at the time. This made long-distance travel and interstate commerce very difficult. It wasn’t until 1956 and the passage of President Eisenhower’s Federal Highway Act, that the rules became standard across the entire United States. Today, whether you’re in Houston, Boston or St. Louis, everything from the signage on the road to the speed limits and road markings are all the same.

Like the standardization of national highway system, the IO-Link Consortium standardized the rules by which devices in automation communicate. Imagine your home as a controller, for example, the roads are cables, and your destination is a sensor. Driving your car to the store is analogous to a data packet traveling between the sensor and the controller.

You follow the rules of the road, driving with a license and abiding by the speed limits, etc. Whether you’re driving a sedan, an SUV or a semitruck, you know you can reach your destination regardless of the state it’s in. IO-Link allows you to have different automation components from different suppliers, all communicating in sync unlike before, following a standard set of rules. This empowers the end user to craft a solution that fits his or her needs using sensors that communicate using the protocols set by the IO-Link Consortium.