The PFB industry requires the highest standards of quality and productivity when it comes to both their products and their equipment. In order to keep up with the rising demands to produce high quality parts quickly, many in the industry have incorporated photoelectric sensors into their lines. With their durable designs, accurate measurements and fast data output speeds, it is easy to see why. Combine the sensors’ benefits with the clean and well-lit environment of a PFB plant, and it begins to feel like this product was made specifically for the industry. There are many variants of photoelectric sensors, but the main categories are: through beam, diffuse, and retro-reflective sensors.

Through beam sensors come in many different shapes and sizes but the core idea stays the same. An emitter shoots LED red, red laser, infrared, or LED infrared light across an open area toward a receiver. If the receiver detects the light, the sensor determines nothing is present. If the light is not detected, this means an object has obstructed the light. 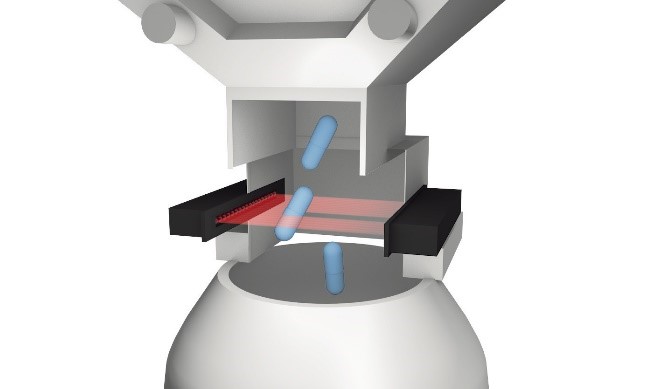 Diffuse beam sensors operate a little differently in that the emitter and receiver are in the same housing, often very closely to one another. With this sensor, the light beam is emitted out, the light bounces off a surface, and the light returns to the receiver. The major takeaway with the diffuse beam sensor is that the object being detected is also being used as the reflecting surface.

Retro-reflective sensors are similar to diffuse beam sensors in that the emitter and receiver are also contained within the same housing. But this sensor requires an additional component — a reflector. This sensor doesn’t use the object itself to reflect the light but instead uses a specified reflector that polarizes the light, eliminating the potential for false positive readings. Retro-reflective sensors are a strong alternative to through beam when there isn’t room for two separate sensor heads.