Capacitive sensors are versatile for use in numerous applications. They can be used to detect objects such as glass, wood, paper, plastic, ceramic, and more. Capacitive sensors used to detect objects are easily identified by the flush mounting or shielded face of the sensor. This shielding causes the electrostatic field to be short and conical shaped, much like the shielded version of an inductive proximity sensor. 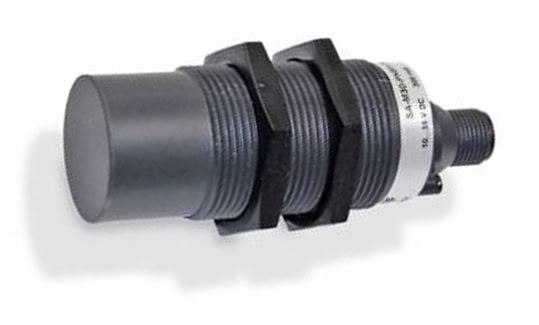 Just as there are non-flush or unshielded inductive sensors, there are non-flush capacitive sensors, and the mounting and housing look the same. The non-flush capacitive sensors have a large spherical field which allows them to be used in level detection, including detection of liquids and granular solids. Levels can be detected either directly with the sensor making contact with the medium, or indirectly with the sensor sensing the medium through a non-metallic container wall.

Capacitive sensors are discrete devices so once you adjust the sensitivity to detect the target while ignoring the container, the sensor is either on or off. Also remember that the sensor is looking for the dielectric constant in the case of a standard capacitive sensor or the conductivity of a water based liquid in the case of the hybrid technology.

Recent technology advances with remote amplifiers have allowed capacitive sensors to provide an analog output or a digital value over IO-Link. As previously mentioned, these sensors are based off of a dielectric constant so the analog value being created is dependent on the media being sensed.

While capacitive sensors are versatile to work in many applications, they are not the right choice for all applications.

Recently a customer inquired if a capacitive sensor could detect the density of an substance and unfortunately the short answer is no, though in some applications the analog sensors can detect different levels of media if it can be separated in a centrifuge. Also, capacitive sensors may not detect small amounts of media as the dielectric constant of the media must be higher than the container that holds the media.

There are three important steps in applying a capacitive sensor — test it, test it and test it one more time. During your testing procedures be sure to test it under the best and worse conditions. Also like any other electronic device temperature can have an affect although it may be negligible there will be some affect.