Most sensors offered today by reputable manufacturers include some type of electrical output protection that prevents sensor damage in the event of a wiring fault. There are a variety of protection methods and functions available, so let’s take a quick look at some of the most commonly found types.

This one is fairly straightforward and does just what its name implies. In case of accidentally reversed positive and common power leads, a series diode prevents any reverse flow of current that could damage the internal sensor electronics.

This takes polarity reversal protection to the next logical step. Any of the three sensor wires can be misconnected in any combination and the sensor will not be damaged. For example, output to positive, common to load, and positive to common. Or, output and common to positive, and positive to load … you get the idea. Regardless, the sensor will be protected and will function normally once it is properly connected.

In either case of reversed polarity or other miswiring, although the sensor won’t be damaged, the sensor still represents a system fault and will require troubleshooting. This is why more and more machine builders and plant operators are moving away from hand-terminated sensor cables and toward double-ended quick-disconnect cordsets and distributed modular I/O over IO-Link.

This protects the output of the sensor from damage if it is connected to a dead short. Left unprotected, the sensor’s output becomes a fuse and “blows”, permanently destroying the sensor.

There are three types of short-circuit protection in use:

Thermal SCP utilizes series device called a thermistor. As current through it rises, its resistance increases, which acts to throttle the current to a safe level. When the short circuit is removed, the sensor requires a cool down period before it can resume normal function. This is a crude form of short-circuit protection; modern 3-wire sensors no longer employ this method but some older types or some from lesser-known manufacturers may still be using it. One potential advantage for thermal SCP is that it has an inherent time delay that allows for a slightly longer, larger inrush current. This may be helpful in starting some high inrush loads like larger relays or incandescent lamps. However, in most cases today there is no need for a sensor to directly pilot loads like this. Most sensors today have a PLC input as a load. 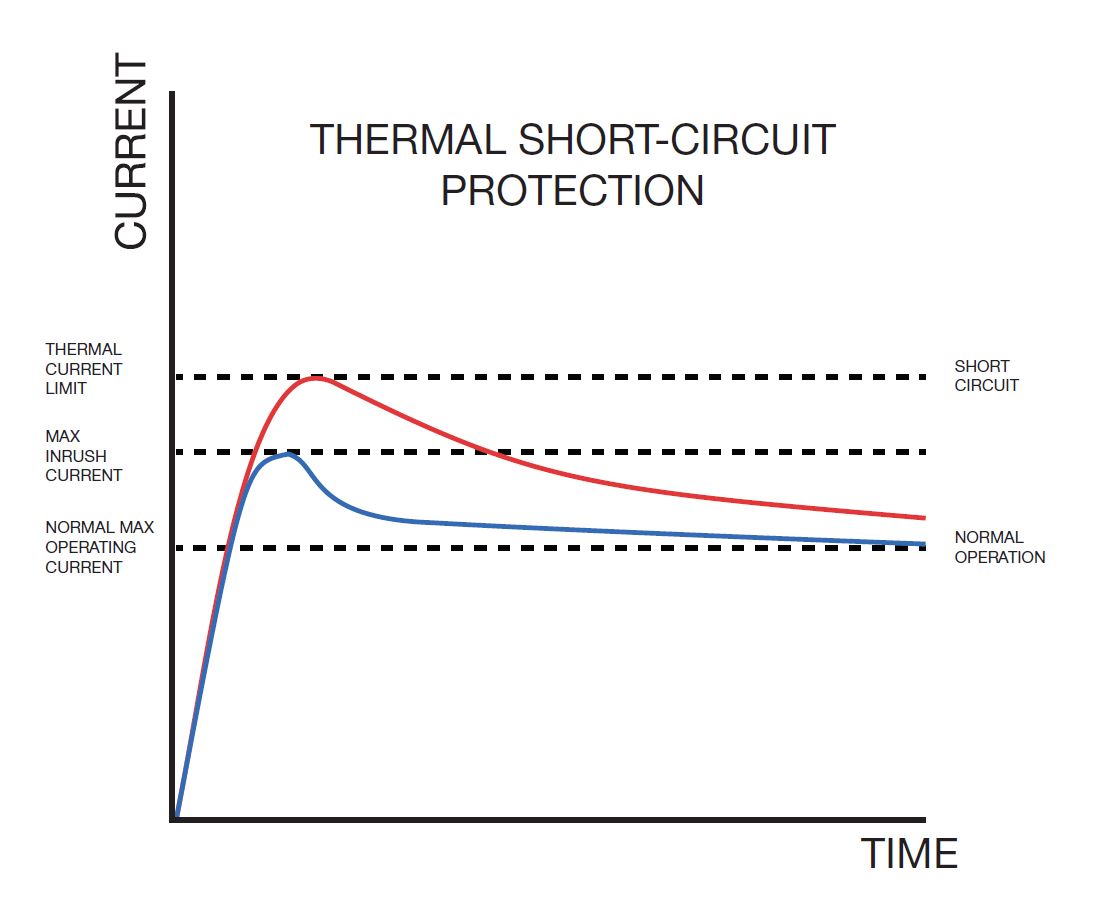 Latching solid state SCP was common in the past but today is less widely used. When the output current exceeds a defined threshold, the output circuit opens, stopping the flow of current. To reset the sensor after the fault, power to the sensor must be cycled (interrupted and re-applied). This can create a nuisance if the fault is intermittent, because someone has to disconnect and reconnect the sensor to reset it. However, at least the fault condition is captured every time it occurs. 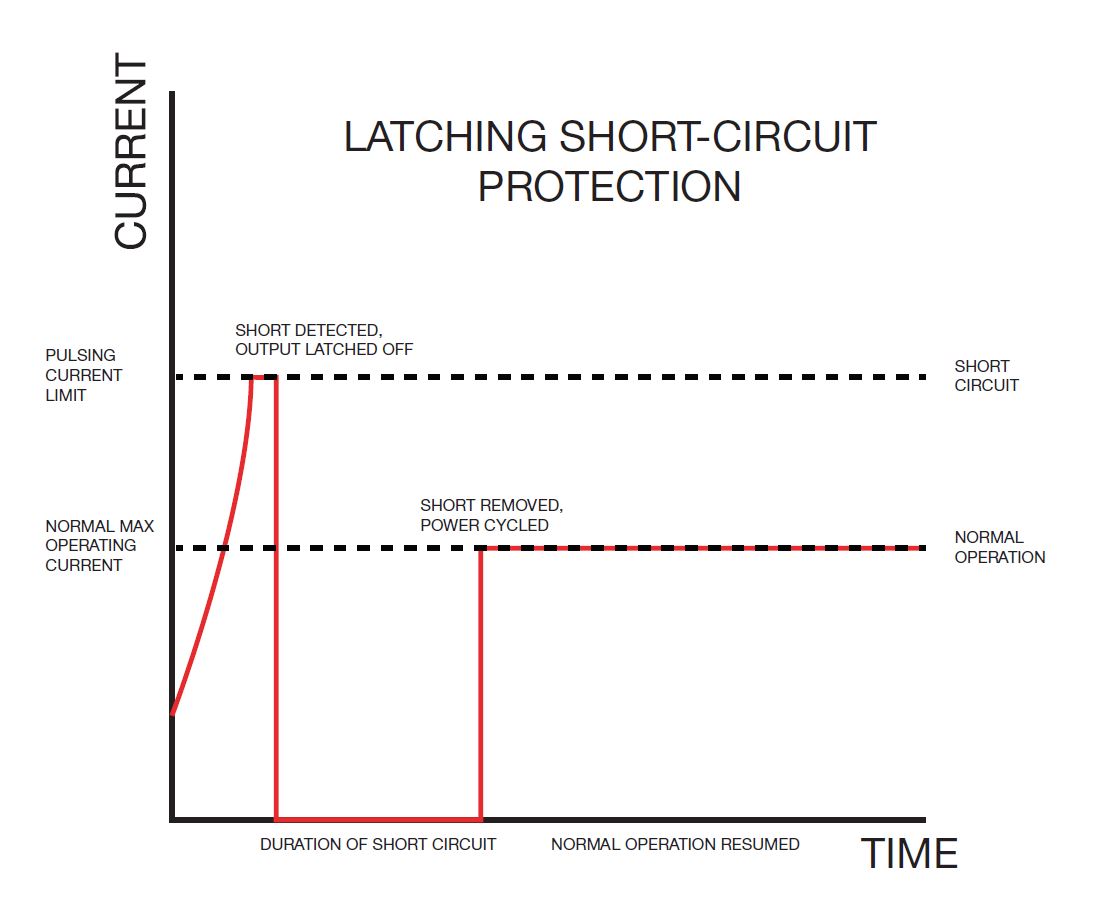 Pulsing solid state SCP is used in most of today’s high-performance sensor designs. The sensor monitors the output for a short circuit and interrupts it the moment the current exceeds the design threshold. Subsequently, the electronics will start to continuously attempt to close the output to see if the fault has been removed. If not, it keeps removing and reapplying power to the output in a “pulsing” manner. If there is an intermittent fault, the sensor will resume normal function when the fault goes away. Sometimes this is called “automatic reset” (as opposed to latching SCP, which is manual reset). Automatic reset can be helpful, or it can be a nuisance. Because the fault isn’t latched, it may be hard to track down which sensor is being shorted if the fault is intermittent. On the plus side, if the fault was one-and-done, the sensor resumes normal function and production continues without further interruption. 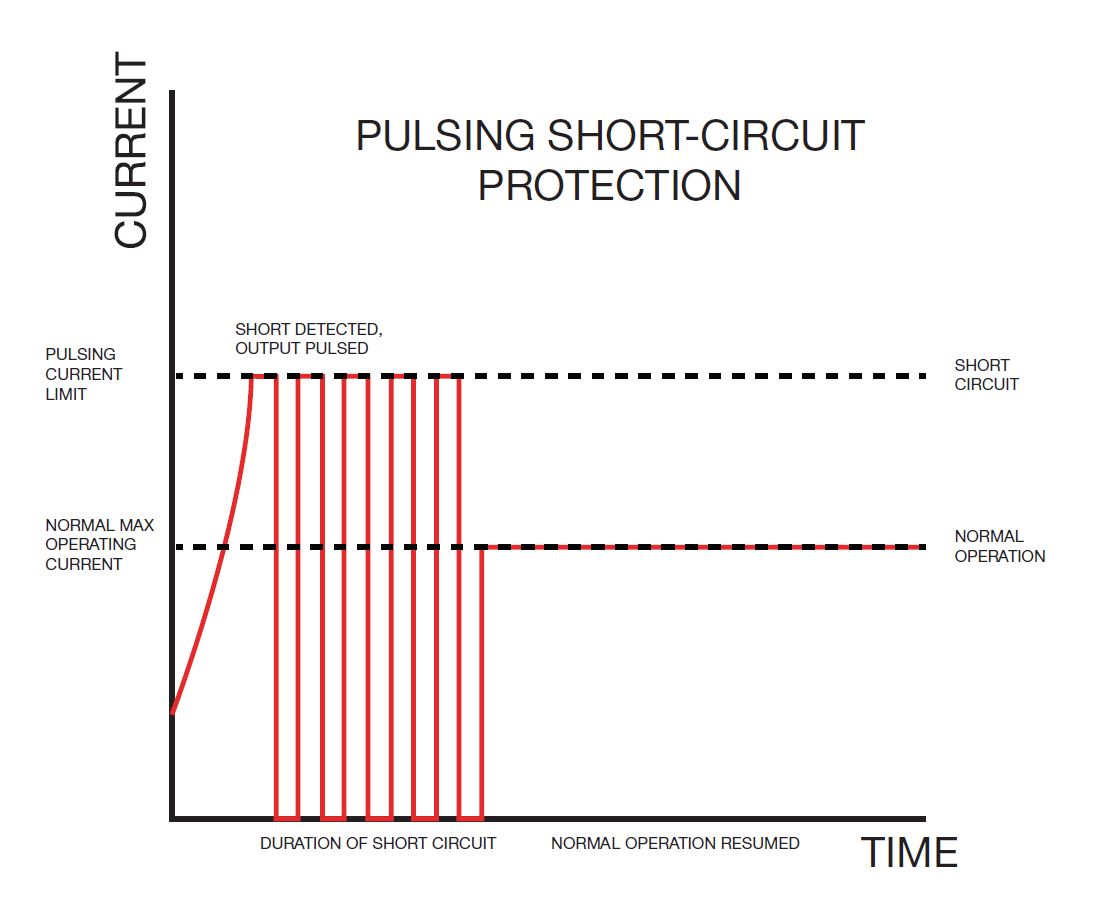 The need to capture short-circuit events is one of the reasons more and more control systems are going with distributed modular I/O blocks using IO-Link. The input port of the block will detect the short circuit and will begin pulsing power to protect the sensor. Although it will automatically reset if the fault is removed, the block will send a fault message to the controller indicating which port was faulted. Note, however, that not all I/O blocks can interrupt a short circuit only at the port level. Many blocks will fault the entire block when only one port is affected. Be sure to ask any potential block supplier how their blocks behave during short-circuit events.

This circuit monitors the length of time that higher-than-normal (but not short-circuit) load current is flowing. Over time, this can cause overheating of the sensor and subsequent damage. Overload Protection will detect this excessive-current condition and — depending on the type of SCP employed —either reduce current to a safe level (thermal SCP), turn the output off (latching SCP), or pulse the output (pulsing SCP).

Also sometimes called Overvoltage Protection, this circuit monitors the incoming power supply voltage. When it exceeds the safe threshold, an internal circuit shunts the excessive voltage and clamps the applied voltage to the sensor at a safe level.

This circuit prevents sensor output damage from high voltages generated by “back EMF” (Electromotive Force) when an inductive load (like a relay coil) is switched off. Sometimes this is referred to as “inductive kickback”. Since current through an inductor tries to remain constant, the voltage across the inductor rises as the current falls to try to keep it flowing at the same level. The voltage can rise to very high levels, hundreds or thousands of volts, and will appear on the sensor’s output line. (In fact, this generation of high voltage from the collapse of current through an inductor is exactly how automotive spark ignition coils operate.)

So, how does inductive overvoltage protection work? Inside the sensor, a shunt device called a “freewheeling diode” allows the current to continue circulating harmlessly through the inductive load while it decays, preventing the buildup of damaging high voltage.