In my last blog post, Sensing Types of Capacitive Sensors, I discussed the basic types of capacitive sensors; flush versions for object detection and non-flush for level detection of liquids or bulk materials.  In this blog post, I would like to discuss how the technology for capacitive sensors has changed over the past few years.

The basic technology of most capacitive sensors on the market was discussed in the blog post “What is a Capacitive Sensor”.  The sensors determine the presence of an object based on the dielectric constant of the object being detected.  If you are trying to detect a hidden object, then the hidden object must have a higher dielectric constant than what you are trying to “see through”.

Conductive targets present an interesting challenge to capacitive sensors as these targets have a greater capacitance and a targets dielectric constant is immaterial.  Conductive targets include metal, water, blood, acids, bases, and salt water.  Any capacitive sensor will detect the presence of these targets. However, the challenge is for the sensor to turn off once the conductive material is no longer present.  This is especially true when dealing with acids or liquids, such as blood, that adheres to the container wall as the level drops below the sensor face.

Today, enhanced sensing technology helps the sensors effectively distinguish between true liquid levels and possible interference caused by condensation, material build-up, or foaming fluids.  While ignoring these interferences, the sensors would still detect the relative change in capacitance caused by the target object, but use additional factors to evaluate the validity of the measurement taken before changing state.

These sensors are fundamentally insensitive to any non-conductive material like plastic or glass, which allows them to be utilized in level applications.  The only limitation of enhanced capacitive sensors is they require electrically conductive fluid materials with a dipole characteristic, such as water, to operate properly.

Up to this point, capacitive sensors have only been able to provide a discrete output, or if used in level applications for a point level indication.  Another innovative change to capacitive sensor technology is the ability to use a remote amplifier.  Not only does this configuration allow for capacitive sensors to be smaller, for instance 4mm in diameter, since the electronics are remote, they can provide additional functionality. 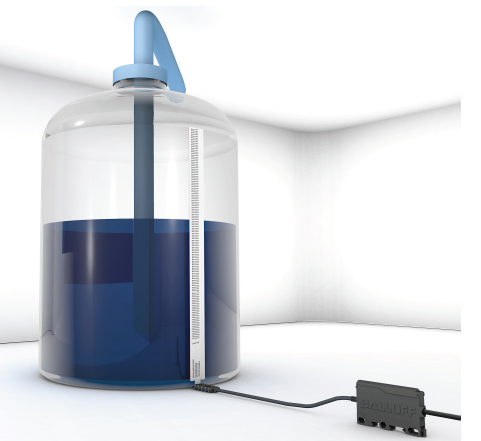 For additional information on the industry’s leading portfolio of capacitive products visit www.balluff.com.