Shortly after posting my last blog, Which light is the right light, I had a customer call with a problem in a machining cell.  They are using a self-contained through-beam sensor, in the form of a fork sensor, with a red light source. They required a small light spot to detect a tool.  As in most machining centers, there is a lot of coolant flying around in the cell and a fine mist in the air.  When water based coolants dry, they separate and leave a white film on surfaces, including photoelectric lenses.  This customer had to shut down their cell and clean off the lens at least once per shift, which was costing them production, time, and money because of false signals.

As we spoke on the phone, I suggested that they use the infrared version because we can burn through the contamination in the environment, in this case the film left behind from the coolant.  The customer wanted some sort of idea of how much residue we could burn through so I did some simple testing and sent him the following pictures.  Picture 1 is a heavy dusting, of all things, coffee creamer.  Picture 2 is a nice dollop of grease from a grease gun and picture 3 is a film of hand cream. 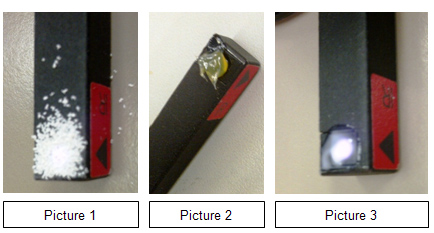 They needed a small light spot offered by the red light and laser versions to detect their tool.  Our versions of this sensor can detect parts as small as 0.4mm and the smallest part the infrared version can detect is 1mm, so this was something I pointed out to him, as I was unsure of the size of the tool he was trying to detect.  As it turned out the 1mm resolution was not a limiting factor.

We sent him a sensor to test in his application and we are happy to report that so far, it has run flawlessly for over 15 days and they have not had to clean the lens once.

Like mentioned in my last blog, infrared LED’s provide the most power with the least amount of heat, is the most efficient light source, and provides some of the longest ranges.  Infrared light sources are perfect for harsh and contaminated environments where there is oil or dust.  The question of which light source do I use?  The answer is…it depends on your application, environment, target, and so forth.  Once you have decided on your light source be sure to test it for the most successful results.