Ultrasonic sensors can detect objects that many traditional sensing technologies cannot because of their ability to see targets regardless of color, transparency and surface texture. Even in dusty, humid, or hazy environments, they may be the only sensor that is able to provide the desired results. Ultrasonic sensors are often used in liquid level measurement applications and detecting clear films. 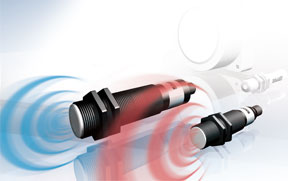 As with some photoelectric sensors, there is a blind zone in front of the sensor where it cannot accurately detect any objects. As I mentioned earlier the sound wave is emitted in a cone-shaped that is approximately 8º however this may vary with some manufactures. The output of the sensor can be either discrete, on or off, or a current or voltage analog output.

Ultrasonic sensors are available in many form factors from M12 to M30, rectangular and flat pack versions. There are sound deflection brackets available to allow the sound waves to be transmitted over or around obstacles. Focusing attachments are available for those applications where you are trying to measure the liquid level or detect an object in a small container.

When confronted with one of those seemingly impossible object detection or level measurement applications, remember that ultrasonic sensors may be the sound solution you are looking for.