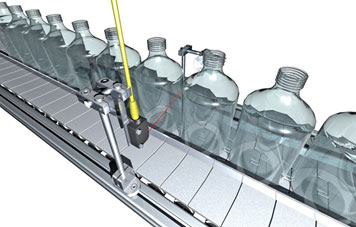 Reflectors can be either a special reflector, you really don’t want to use the one off of someone’s bicycle, or reflective tape. The reflector or tape can be out off alignment by as much as 15º and the maximum distance a retroreflective sensor can sense is often based off a certain size reflector. Generally, reflective tape will be 25 – 30% less reflective than the reflector, which is about 3000 times more reflective than white paper. The key thing to remember is the object you are trying to detect must block all of the light coming back from the reflector.

If you are trying to detect the wrapped skid then the answer is the polarized retroreflective sensor. In this case, there are polarizing filters in front of the light source and the receiver that are ninety degrees out of phase with each other. The reflector will depolarize the light thus allowing the light to reach the receiver. The polarized retroreflective sensor will also typically have a shorter sensing distance than a non-polarized sensor.

Retroreflective sensors have solved many applications over the years with great success and will continue to solve various applications. Just remember to make the target larger than the reflector and watch those shiny surfaces.

One Reply to “Getting Retroreflective with Photoelectric Sensors”